Coca-Cola is getting in the game – literally – through a first-of-its kind content integration with the new EA SPORTS? FIFA 18, which follows the career of virtual football phenom Alex Hunter.

In “The Journey: Hunter Returns” story mode of the game, Hunter signs an endorsement deal as a brand ambassador for the new Zero Sugar and films a commercial inspired by one of the most iconic ads ever made.

The computer-generated spot is a re-enactment of the brand’s classic 1979 “Mean Joe” ad, in which a young fan hands American football hero “Mean” Joe Greene a bottle of after a tough game. In the in-game commercial, which all FIFA 18 players will see, Hunter is approached by a fan in the stadium tunnel and offered an ice-cold Zero Sugar after exiting the pitch.

This homage fits naturally within the “Journey” storyline, says Matt Wolf, VP of entertainment, ventures and strategic alliances, . “We saw the opportunity to capture the essence of this classic spot, which is beloved by so many fans, and bring it forward to younger generations who may be familiar with the original," he said. "And we added a modern touch by replacing the jersey toss with a fan selfie with Alex.” 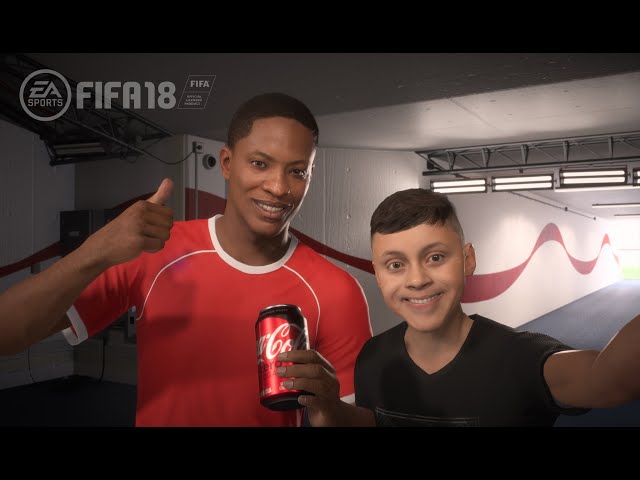 The game's cinematic “Journey” mode, which debuted last year with FIFA 17, showcases the off-the-pitch life of one of the world’s best footballers.

“When you reach the top level of the sport, it’s no longer just about kicking the ball,” said Matthew Prior, creative director, EA Sports. “With ‘The Journey’, we’re giving fans an authentic look at all sides of the game – from the arena, to the world of agents, sponsorship deals and more. And with playing such a key role in the world of football, led by its FIFA World Cup sponsorship, this brand partnership made sense.”

Prior said 75 percent of FIFA 17’s more than 20 million global players engaged with the cinematic “Journey” feature, which puts a unique spin on standard game play, draws in players and keeps them in the game longer. The story arc is in the hands of the player, who controls the narrative based on decisions made during Hunter's conversations, interviews and more. Player moves impact both Hunter's play on the field and life outside the game. FIFA 18 includes 200 total minutes of “Journey” content, presenting a unique opportunity for to join the plot.

“Going beyond the field of play presented an amazing window for us,” said Alban Dechelotte, senior entertainment marketing manager, . “The role plays in football is before or after the match, so we recognized a natural tie-in with FIFA 18.”

Coke will promote the in-game Zero Sugar commercial across social media and on its new 3D robotic sign in New York’s Times Square. Limited-edition cans with special codes will allow fans to unlock additional game content leading up to the 2018 FIFA World Cup.

This partnership builds on Coke’s longstanding connection to both the sport of football, through its sponsorship of the FIFA World Cup and grassroots programs like Copa , and the fast-growing world of competitive gaming and, more specifically, eSports.

In 2013, Coke partnered with Riot Games and League of Legends, launching a challenger series to give amateur players a path to pros. The brand also has hosted eSports viewing parties in cinemas around the world, giving a unique way to share experience of a live eSports event with other fans.

“Fans of the FIFA game, especially younger fans, share a 360-degree passion for football – playing, watching and gaming,” Dechelotte said. “So we decided to connect the love stories Coke has with the real and virtual worlds of football through our partnership with the world’s biggest football video game.”

RECOMMENDED FOR YOU:
New Coke and Netflix Take Viewers Back to 1985 for Stranger Things Season 3 in First-of-its-Kind Partnership